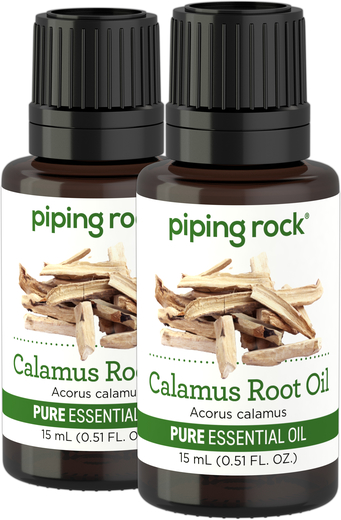 A water-loving plant native to marshy areas in the northern hemisphere, Calamus Root oil’s warm and spicy yet fresh scent makes it a unique and popular addition to cosmetic products. In aromatherapy, it is also popular for:

A tall plant found in wet and marshy areas of Europe, Asia, and North America, calamus has been a part of diverse herbal traditions for thousands of years, including traditional Chinese as well as Native American wellness practices. Historically, calamus has been used as a component of holy anointing oil in religious practices.

The plant is often viewed as a symbol of love. Its name, in Greek, is associated with the myth of Kalamos, the son of a river god. Calamus has been referred to as “sweet flag” by the likes of Henry David Thoreau and written about extensively by the poet Walt Whitman who used it as a symbol of affection and love.

Calamus Root Essential Oil is steam distilled from the root of the calamus plant. Its aroma is uniquely spicy and woody, often described as being similar to cinnamon with fresh green notes. Because of its warm aroma, it is a prized ingredient in luxurious perfumes and skincare products. In aromatherapy practices it is valued for rejuvenating the senses in times of occasional stress and for being invigorating, reassuring and spiritually engaging.

Calamus Root Oil Directions for Use

Add 3-5 drops of Calamus Root Oil to a diffuser or vaporizer, to a bowl of steaming water or a hot bath to fill a room with its spicy and cinnamon-like aroma. To use topically, add ~5 drops of Calamus Oil to ~10 mL of any PipingRock carrier oil.

Calamus Oil is for external use only and should be diluted in a carrier oil such as sweet almond, jojoba, grapeseed or avocado oil before being used topically. Do not apply to broken or irritated skin. Always consult your trusted physician before adding any essential oil to your regimen, especially if you are pregnant, nursing or taking any medications. Discontinue use and alert your doctor should an adverse reaction occur. Keep out of reach of children and away from eyes and mouth. Essential oils are flammable.