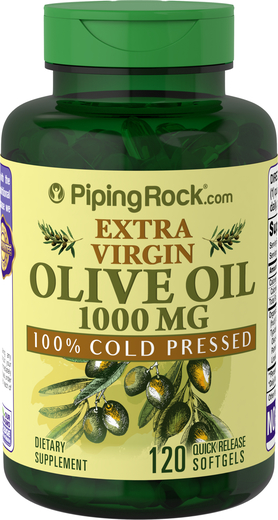 Olive oil supplements are sourced from the tree's world-renowned fruit. Long used in cuisine, the oil is rich in essential fatty acids and other beneficial natural compounds. It works to:

What is Olive Oil?

The olive tree has been highly valued since the time of ancient Greece, with its leafy branch serving as symbol of peace for thousands of years. While the flavorful fruit has been widely appreciated on its own as a food, its oil also has an extensive history of use, particularly in the culture of its native Mediterranean region. In the pre-Christian era, it was often utilized in lamps, mixed with fragrances for religious rites and applied topically by athletes for its associations with skin health. The oil, which is generally cold-pressed from whole olives, also became prevalent in Greek and Roman cuisine. Today the oil is common throughout the world, including Europe and the United States, and typically used in salads and pasta dishes. One of its most renowned varieties is extra virgin, a style deemed to have the highest quality and best taste.

The oil also features numerous antioxidant polyphenols, including oleuropein and oleocanthal. One polyphenol in particular – hydroxytyrosol – has garnered significant interest for its especially potent antioxidant activity.** This rich array of antioxidant polyphenols found in olives help the fruits to survive and thrive in the searing sunshine and high temperatures of the Mediterranean. The presence of diverse active compounds – healthy fatty acids, antioxidants and an abundance of vitamin E – have led to the oil's associations with various health benefits.**

The oil has been most extensively studied for its cardiovascular support, with investigations showing that its compounds help maintain blood lipid (cholesterol) balance, already within normal range, along with overall circulatory wellness.** In 2004, the FDA allowed the following qualified health claim: "Limited and not conclusive scientific evidence suggests that eating about 2 tablespoons (23 grams) of olive oil daily may reduce the risk of coronary heart disease due to the monounsaturated fat in olive oil. To achieve this possible benefit, olive oil is to replace a similar amount of saturated fat and not increase the total number of calories you eat in a day. One serving of this product [Name of food] contains [x] grams of olive oil."

The oil's antioxidants and other nutrients also help combat harmful oxidative stress and aid in maintaining balance throughout the body.** This response additionally assists in encouraging immune health.** Further studies have reinforced the oil's traditional associations with maintaining skin wellness, both internally and externally, and point to its potential in promoting cognitive and gastrointestinal health.**

One of the globe's most prevalent culinary oils, the light liquid is often used as a salad dressing and a dip for bread, frequently along with vinegar. When utilized in cooking, the oil should kept in low to medium heat to preserve its beneficial compounds. The oil is also incorporated into various skin care products, including cream and lotions, and sometimes used in massage.

Olive oil supplements are typically pressed from the whole olive fruit. Cold-pressing is a preferable means of extracting the oil, as heat may degrade some of its more fragile active compounds. The oil is commonly available as a liquid in many different varieties and also offered as softgels. It may be sold in a blend with other oils containing essential fatty acids. Olive oil is often found in skin and hair products such as creams, lotions, soaps and shampoos.

Olive Oil Directions for Use

Regular supplementation of the oil should not begin before consulting with a health care professional. In softgel form, olive oil supplements are generally found in doses of 1,000 mg (1 gram).**