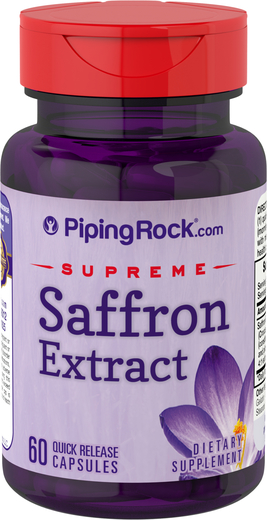 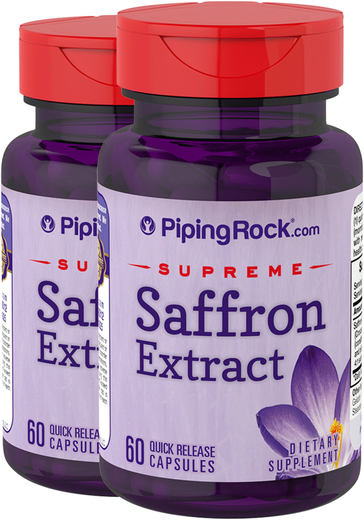 Saffron is a valuable spice derived from its namesake crocus flower. The plant's floral strands have been used for thousands of years in cooking, textiles and health traditions. Saffron Supplements wellness benefits can include:

Sourced from the Crocus sativus flower, saffron is a spice that has been highly valued around the globe for centuries. Originating from Greece, it consists of the bloom's delicate dried stigmas and features a complex, subtly sweet flavor and scent. It also imparts bold colors in the red, orange and yellow spectrum, making it historically sought after as a dye.

Pliny the Elder of ancient Rome famously appreciated the spice's unique taste, fragrance and hue, and believed that it held an array of wellness applications. Cleopatra and Alexander the Great bathed together in water that had been scented with the spice, purportedly for its vitality benefits. The spice also has special significance in Buddhism, with monks dying their traditional robes in the plant's deep orange pigment.

In contemporary society, saffron is prevalent in Indian, Middle Eastern and Spanish dishes, adding bright color and flavor notes to curries, bouillabaisse and paella. The spice is primarily grown in Iran, Greece and Morocco. While its market value may vary, it is often assessed at $5,000 per pound—making it one of the most expensive spices in the world. Its unusually high expense is due to its fragile nature and labor-intensive harvesting method—every light purple crocus yields only three thin stigmas that must be hand-picked. It takes 75,000 blooms to make a single pound of the spice.**

This extensively traded and exotic spice is prized for more than just its culinary and aesthetic properties—it is also called upon for its extensive, growing list of diverse health benefits. In traditional Persian wellness practices, the yellow spice was used to support a positive mood. Modern studies have reinforced this use, with results suggesting that the plant extract encourages emotional balance, bright mood and sharp cognitive function.**

Saffron appears to play a role in women’s wellness; evidence suggests it significantly improves menstrual comfort, assisting with cramping and symptoms of PMS. The spice has additionally been connected with stimulating satiety and curbing the desire to eat, a quality that may assist with healthy weight management. Further studies have linked the nutrient to maintaining optimal immune system and cardiovascular system function.**

In one emerging area of research, the plant pigment spice has been linked to optimal vision health: It appears to protect the eye’s photoreceptors from dangerous UV light rays emitted from the sun. The golden spice may also influence eye performance, with evidence suggesting it assists with glare problems, reduce flash blindness and support retinal sensitivity. An antioxidant pigment found in the spice called alpha crocin content is believed to nourish and shield the eye’s macular pigment, a protective layer associated with sharp visual acuity.**

Saffron’s multifaceted wellness benefits are largely tied to the spice's high content of free-radical-fighting antioxidant carotenoids, including beta-carotene, lycopene and zeaxanthin, as well as antioxidants called crocins (alpha crocin and picrocrocin in particular are associated with wellness benefits, and are widely present in the spice) and a volatile oil called safranal. The carotenoids give the spice its rich, warm color and account for its high antioxidant activity.**

Saffron Supplements are extracted from the thread-like stigmas of the flower. As a spice, it is generally sold by the ounce or gram as strands or powder. In supplement form, it is primarily available as capsules. Some patented forms of the spice are made from non-GMO blooms only.**

Saffron Supplements Directions for Use

Talk to your health care provider before beginning routine supplementation with this, or any other, nutritional supplement. While no suggested amount has been established, capsules often range between 15 mg and 100 mg per serving.**